I finally got out for a run. I have been here, in Birmingham UK (3000+ miles from home) for 5 days now and after a whole lot of pep- talking (me to myself) I did it and it was glorious. I had been thinking about getting out there A LOT- but was having all the regular anxiety I often have in new situations, and have been talking myself out of it. You would think that at my age (48) and with the kind of experience I have in travelling (7 trips to Europe alone in the last 2 years) I would be pretty laissez faire when it comes to making myself at home in a new city and surroundings- but in fact, I have an awful time with really settling in. Part of it is the loneliness/homesickness/nostalgia that I wrote about yesterday and part of it, I think, is just my totally awkward social nature. Yes, me, who as a teacher, performer, and Mother of six has to deal with other humans almost constantly, actually  has a medium to high level of anxiety of dealing with other people and in particular strangers. But even more importantly, I hate looking like I don’t belong somewhere. This is why I love David Sedaris so much because he says so many things, about feeling awkward, especially in foreign cities, that I feel. He did a great interview NPR’s This American Life on his experiences in Paris that I relate to so well.

So! In the case of me procrastinating going out for a run, it was really nothing to do with me just being lazy and everything to do with feeling discombobulated in a new city, For example, because I am staying right in the city centre, I was nervous about running aimlessly through the busy streets and having to worry about traffic (I CANNOT get used to the whole cars on the wrong side of the road here and literally have to speak out loud to myself every time I cross the road saying “look the opposite way!”). So I did what any good PhD student would do and I researched it. I studied maps and then went for a test “walk” yesterday.

And this morning I went for it and headed out. (I carefully chose this morning as it is a bank holiday here and hardly any traffic). And it was, as I said glorious. In less than 10 minutes I was on the Birmingham Canals. And it was absolutely gorgeous in all the  most cliché ways. The sun was shining, the birds were chirping and after I finished chastising myself for being so utterly ridiculous in buying into my silly anxieties,  I plodded along in the most satisfied way. 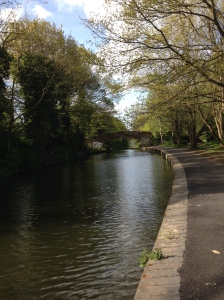